You are here: Home / Archives for Rob

Eldnar Randle was born in Delano, California in 1892 and died in 1973 in Oregon.  For most of his working years he was an auto mechanic. But he shared a distinction shared by only 1 in over 700,000 Americans. Any guesses? A clue:  Look closely at his name.

Yes, Eldnar Randle was given a palindromic name. It reads the same backwards and forwards. This phenomenon is quite rare. A search of the 88 million names in the Social Security Master Death File (SSMDF) shows only 119 cases, including:

The question that came to mind was, how many of these were intentional, picked by the parents specifically to be palindromes, and which ones were just pure chance? Given names are often picked to honor some relative, often a parent or grandparent. Picking an unusual name, never used in the family before, probably has a story behind it. Some of the names certainly look a bit far-fetched. Ecallaw Wallace? But others sound quite natural, like Nella Allen. And Eldnar Randle? It is hard to tell. Looking at the 1900 census I  see his father was a farm laborer and his mother a housewife. Both were literate. None of the other children had unusual names. But somehow he received the invented named “Eldnar.”

Riew Weir? No, I don’t think that would have worked.

Are there any other examples of world play in names that it is worth looking for among the 88 million names in the SSMDF?  Anagrams?  Something else? 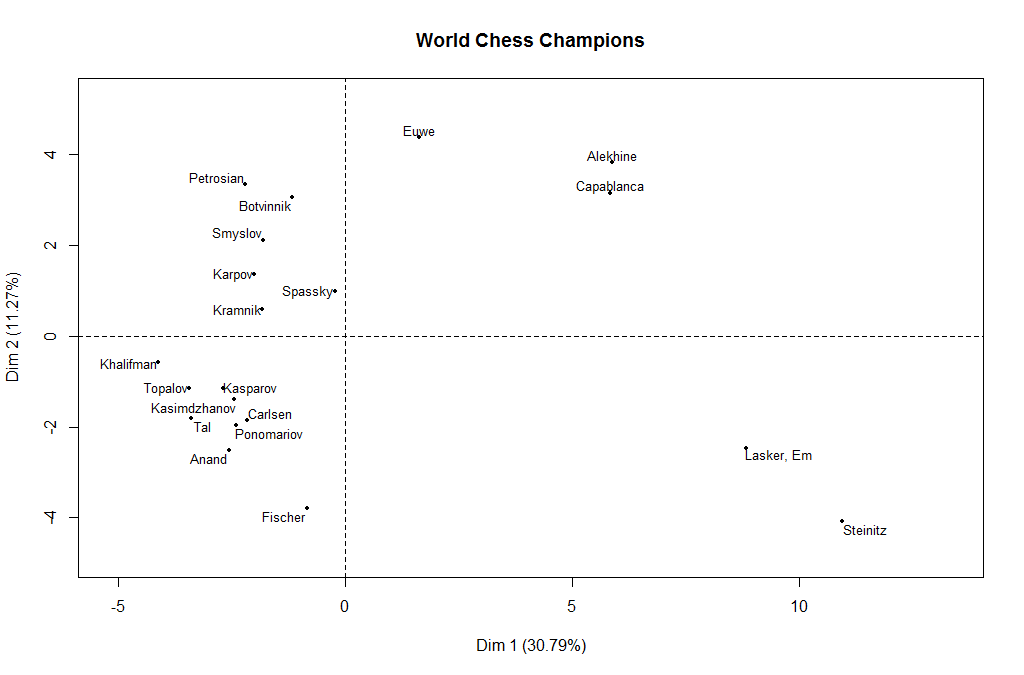 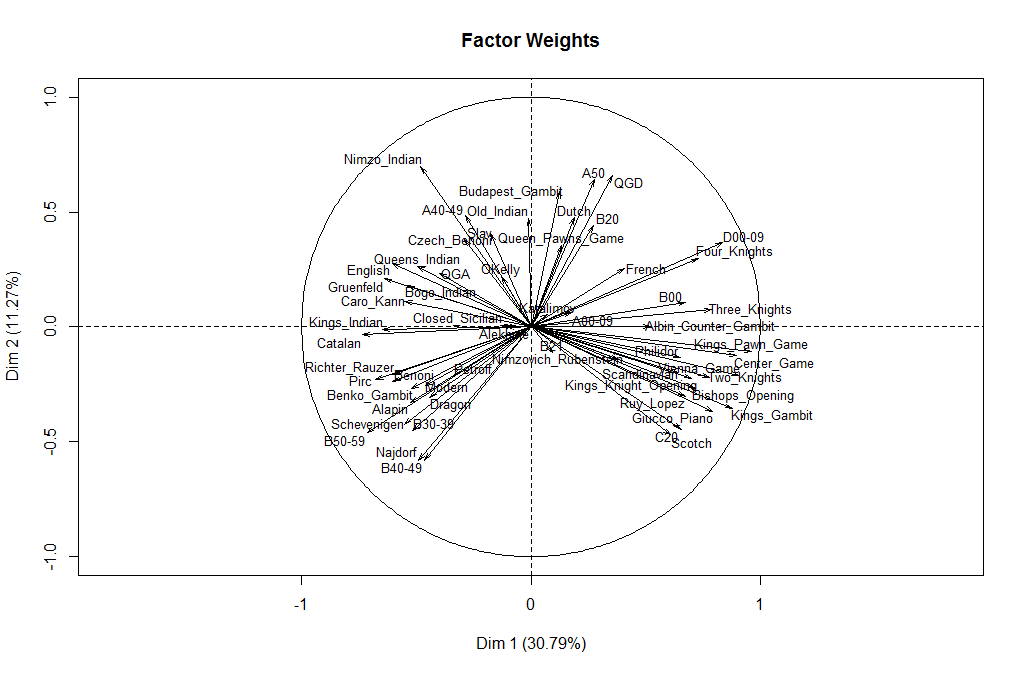 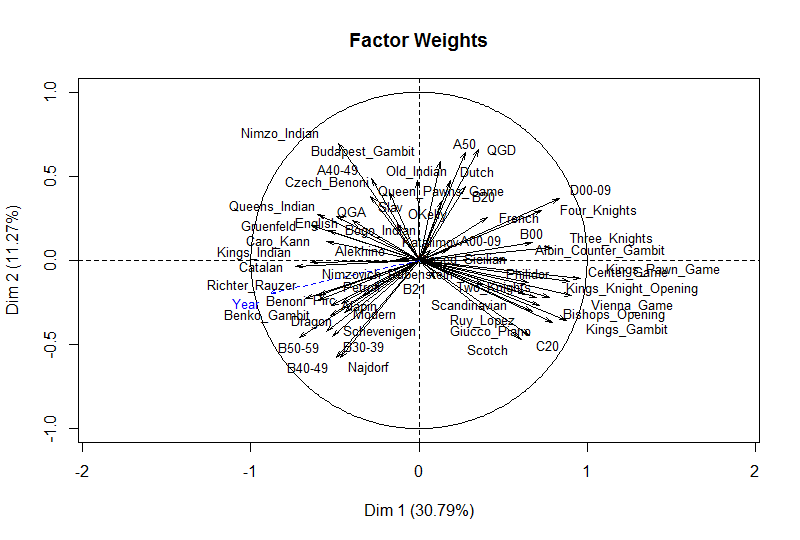 Last year I did a three-part blog (“The Power of Brand and the Power of Product”) describing a simple model of product adoption and market share, and showed how the parameters of that model could be determined using a single survey question.     I used the open source productivity suites, OpenOffice and LibreOffice, as examples.   It is now time to update that analysis with the most-recent survey data. (If you want to look up the original posts, here are the links: part one, part two, part three).

To recap the methodology,  I conducted a survey using Google’s Consumer Survey service, which uses sampling and post-stratification weighting to match the target population, which in this case was the U.S. internet population.  In other words, the survey is weighted to reflect the population demographics, for age, sex, region of the country, urban versus rural,  income, etc.

The question in the survey was:

What is your familiarity with the software application called “OpenOffice”?

With 1502 responses, the results were:

The same question was asked about LibreOffice, with results:

Now these numbers are somewhat interesting on their own, but what is far more interesting are the derived metrics, which look at things like:

Full details on how these other metrics are calculated, from this single survey question, can be found in Part One of this series.

Here are some charts to show how these metrics have evolved over the 2 1/2 years I’ve worked with this survey approach: 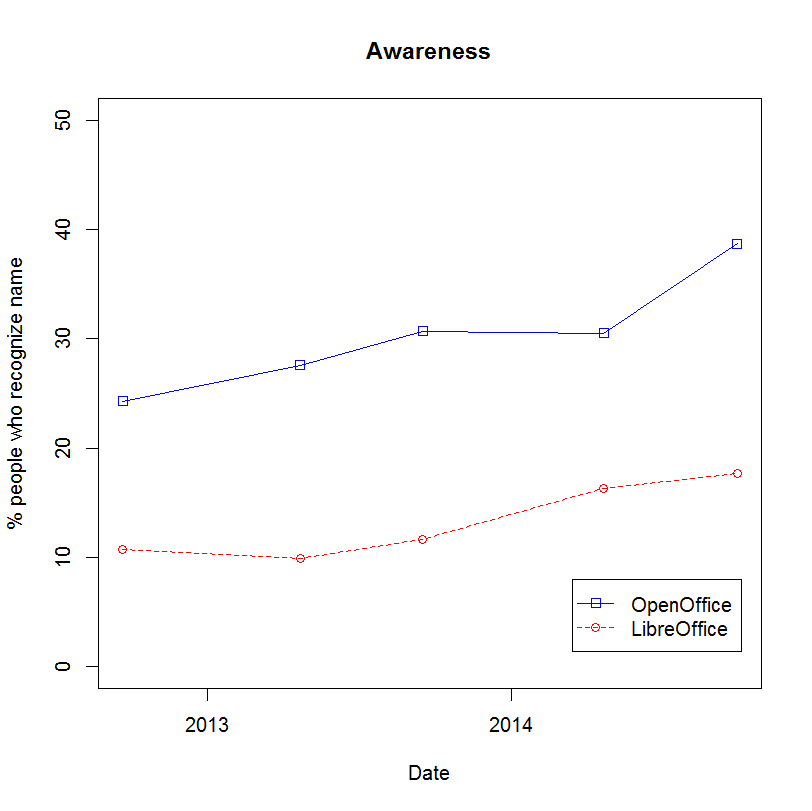 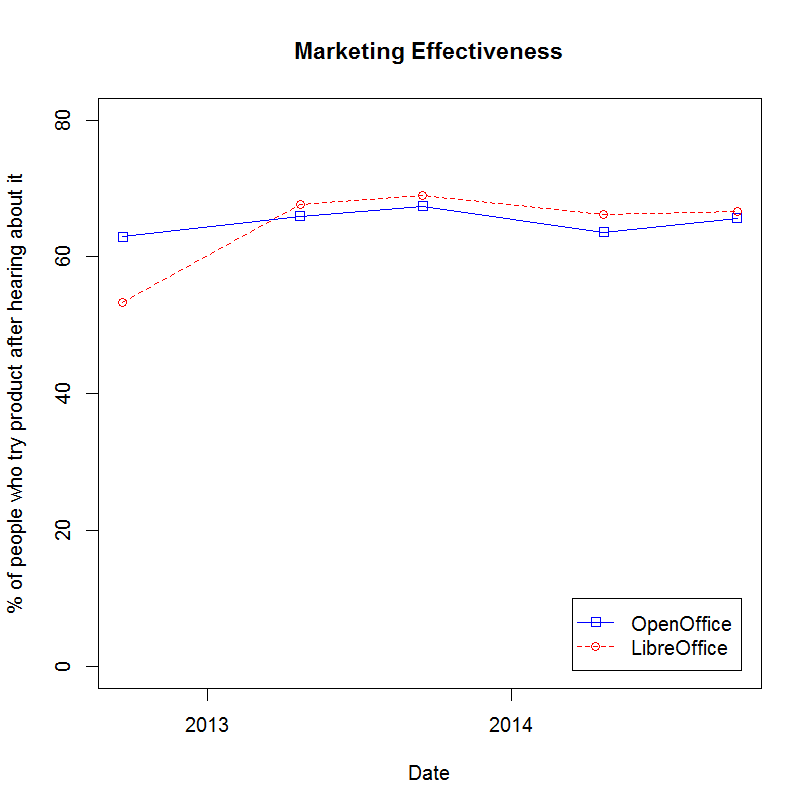 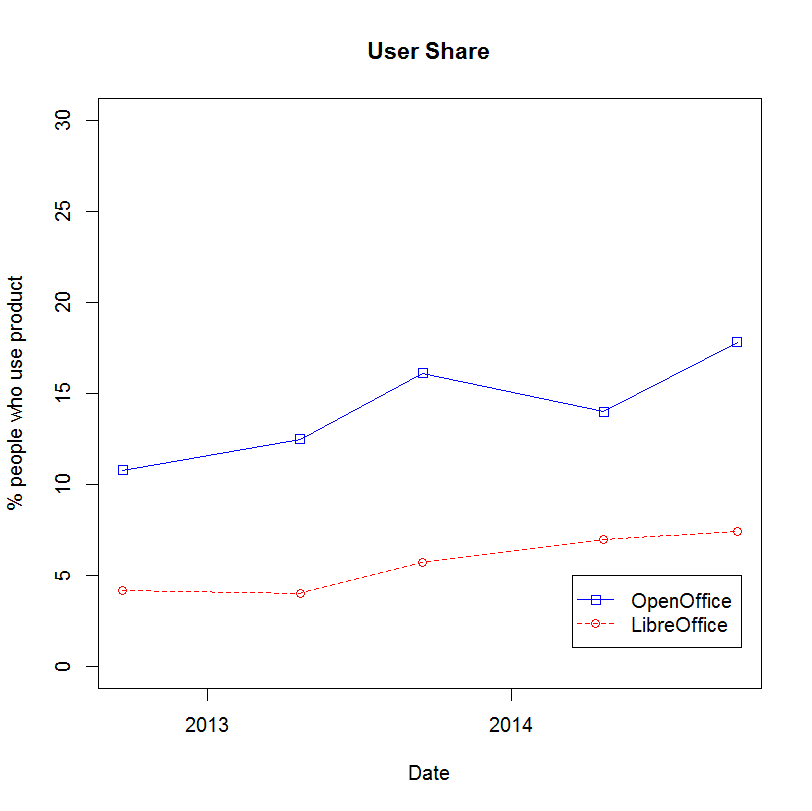 Those who know me know that I am partial to OpenOffice, an open source project that I contribute to.   So I am extremely pleased to see it continue to advance in all fronts.   Since coming to Apache, OpenOffice’s name recognition has grown from 24% to 39% and the user share has grown from 11% to 18%, while keeping user satisfaction constant.   This is a testament to the hard work of the many talented volunteers at Apache.

OASIS ODF 1.2, the current version of the Open Document Format standard, was approved by ISO/IEC JTC1 National Bodies after a 3-month Publicly Available Specification (PAS) ballot.  The final vote for DIS 26300 was:  17-0 for Parts 1 and 2, and 18-0 for Part 3.

Of course, this is a very good result and all those involved, whether TC members and staff at OASIS, implementors, adopters and promoters of ODF and open standards in general should be pleased and proud of this accomplishment.

This was a team effort, obviously, and I’d like to give special thanks to Patrick Durusau  and Chris Rae on the ODF TC for their special efforts preparing the PAS submission for ballot, Jamie Clark from OASIS for putting together the submission package and Francis Cave, Alex Brown, Murata Mokoto and Keld Simonsen in JTC1/SC34/WG6 for their continued advice, feedback and support.

Since comments were received by Japan and the UK,  we now start the comment disposition process.  The SC34 Secretariat will determine whether a Ballot Resolution Meeting (BRM) is required, or whether the comments can simply be handed to the Project Editor for application to the specification prior to publication.   One way or another, there will be a little more work before publication of the ODF 1.2 International Standard.

The OASIS ODF TC continues work on ODF 1.3, with renewed vigor.  After nearly a decade of involvement with ODF, and many years leading the committee, I’ve stepped down.   The TC has elected Oliver-Rainer Wittmann, a long-time TC member, ODF implementor and a familiar face at ODF Plugfests, to take over.   I’m currently exploring other areas related to open innovation (open standards, open source, open data, open APIs).  If you know of anything interesting, https://linkedin.com/in/rcweir.

The dressing and arming of a warrior is a common set scene in epic poetry, e.g., Iliad 2:

He put on a soft khiton,
fine and newly made, and put around himself a great cloak.
Under his shining feet he fastened fine sandals
and around his shoulders he placed a silver-studded sword.
He took up the ancestral scepter which is always unwilting.

The structure and contents of such scenes have been well-studied by scholars, e.g., Armstrong 1958, and even parodied, as in Pope’s mock epic The Rape of the Lock:

Now awful Beauty puts on all its Arms;
The Fair each moment rises in her Charms,
Repairs her Smiles, awakens ev’ry Grace,
And calls forth all the Wonders of her Face;
Sees by Degrees a purer Blush arise,
And keener Lightnings quicken in her Eyes.
The busy Sylphs surround their darling Care;
These set the Head, and those divide the Hair,
Some fold the Sleeve, while others plait the Gown;
And Betty‘s prais’d for Labours not her own.

However, the dressing of the 21st Century casual American male appears to lack rigorous analysis, a deficiency I hope to remedy, at least in the area of furthering understanding of the dependency constraints of this activity.

It is well-known that underpants must be donned before pants.  Despite the intriguing experimentation by Rowan Atkinson no practical alternative has been found.   Similarly, socks must be put on before shoes, pants before shoes, and both pants and shirt before the belt can be buckled.

Illustrating the topological ordering as direct graph, we have the following:

Within these constraints many dress orderings are possible, some of the more common ones beings:

Orderings like the above are familiar to most people.   However, there are many other possibilities, some perhaps worthy of further exploration:

It will also be appreciated by those practiced in the art that the two socks need not be put on together.  This permits extravagant ordering like:

There is also nothing that prevents a Towers of Hanoi approach for those with time to kill, where -X indicates that X is to be removed:

Hopefully the above gives ideas for further exploration and experimentation.  Although we do not dress and arm ourselves to fight the Trojans, our morning ritual can be equally an epic experience!