You are here: Home / OOXML / Two Feet, No Feathers

We typically use words to communicate, to be understood. That is the common case, but not the only case. In some situations, words are used like metes and bounds to carefully circumscribe a concept by the use of language, in anticipation of another party attempting a breach. This is familiar in legislative and other legal contexts. Your concept is, “I want to lease my summer home and not get screwed,” and your attorney translates that into 20 pages of detailed conditions. You can be loose with your language, so long as your lawyer is not.

But even among professionals, the attack/defense of language continues. One party writes the tax code, and another party tries to find the loopholes. Iteration of this process leads to more complex tax codes and more complex tax shelters. The extreme verbosity (to a layperson) of legislation, patent claims or insurance policies results from centuries of cumulative knowledge which has taught the drafters of these instruments the importance of writing defensively. The language of your insurance policy is not there for your understanding. Its purpose is to be unassailable.

This “war of the words” has been going on for thousands of years. Plato, teaching in the Akademia grove, defined Man as “a biped, without feathers.” This was answered by the original smart-ass, Diogenes of Sinope, aka Diogenes the Cynic, who showed up shortly after with a plucked chicken, saying, “Here is Plato’s Man.” Plato’s definition was soon updated to include an additional restriction, “with broad, flat nails.” That is how the game is played.

In a similar way Microsoft has handed us all a plucked chicken in the form of OOXML, saying, “Here is your open standard.” We can, like Plato, all have a good laugh at what they gave us, but we should also make sure that we iterate on the definition of “open standard” to preserve the concept and the benefits that we intend. A plucked chicken does not magically become a man simply because it passes a loose definition. We do not need to accept it as such. It is still a plucked chicken.

(This reminds me of the story told of Abraham Lincoln, when asked, “How many legs does a dog have if you call the tail a leg?” Lincoln responded, “Four. Calling a tail a leg does not make it a leg.”)

With the recent announcement here in Massachusetts that the ETRM 4.0 reference architecture will include OOXML as an “open standard” we have another opportunity to look at the loopholes that current definitions allow, and ask ourselves whether these make sense.

The process for recommending a standard in ETRM 4.0 is defined by the following flowchart: 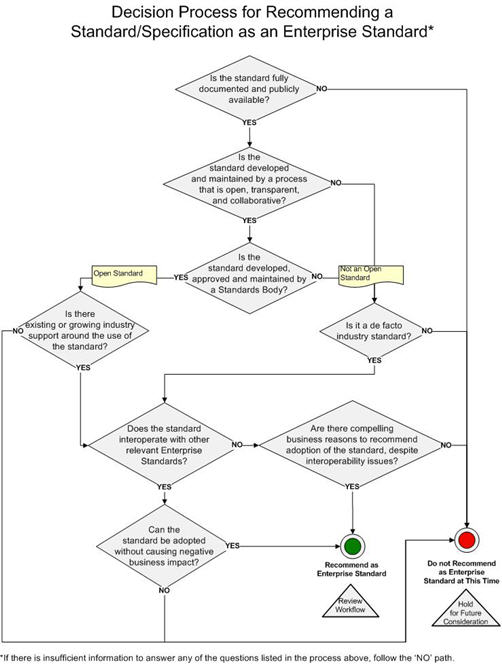 So, let’s go through the first three questions that presumably have already been asked and answered affirmatively in Massachusetts, to see if they conform to the facts as we know them.

There are two additional questions which I won’t presume to answer since they rely more on integration with internal ITD processes.

We learn lessons and move on to the next battle. Just as GPLv2 required GPLv3 to patch perceived vulnerabilities, we’ll all have much work to do cleaning up after OOXML. Certainly JTC1 Directives around Fast Tracks will need to be gutted and rewritten. Also, the vague and contradictory ballot rules in JTC1, and the non-existent Ballot Resolution Meeting procedures will need to be addressed. I suggest that ITD take another look at their flowchart as well, and try to figure out how they can avoid getting another plucked chicken in the future.