Rick Jelliffe, Mr. Schematron, who blogs for O’Reilly, recently announced that he had been contacted by Microsoft to see if he would be interested in a contract to edit the Office Open XML (OOXML) and Open Document Format (ODF) Wikipedia pages. As Rick says,

So I was a little surprised to receive email a couple of days ago from Microsoft saying they wanted to contract someone independent but friendly (me) for a couple of days to provide more balance on Wikipedia concerning ODF/OOXML. I am hardly the poster boy of Microsoft partisanship! Apparently they are frustrated at the amount of spin from some ODF stakeholders on Wikipedia and blogs.

I think I’ll accept it: FUD enrages me and MS certainly are not hiring me to add any pro-MS FUD, just to correct any errors I see. If anyone sees any examples of incorrect statements on Wikipedia or other similar forums in the next few weeks, please let me know: whether anti-OOXML or anti-ODF. In fact, I already had added some material to Wikipedia several months ago, so it is not something new, so I’ll spend a couple of days mythbusting and adding more information.

This immediately brought on an avalanche of commentary, on his blog, and elsewhere. As someone who also blogs on ODF/OOXML topics, I’d like to say a few words on the subject of document format punditry.

Few of my readers know me personally. They only know me via my words. Their acceptance or non-acceptance of this blog and what I say is largely determined by their perception of these two dimensions:

My blog clearly comes with an expert, pro-ODF orientation. Additionally, I try to keep it light and humorous so even if a reader disagrees with me on one issue, at least they will be amused.

Looking at the range of people writing on these issues, I see the landscape something like this: 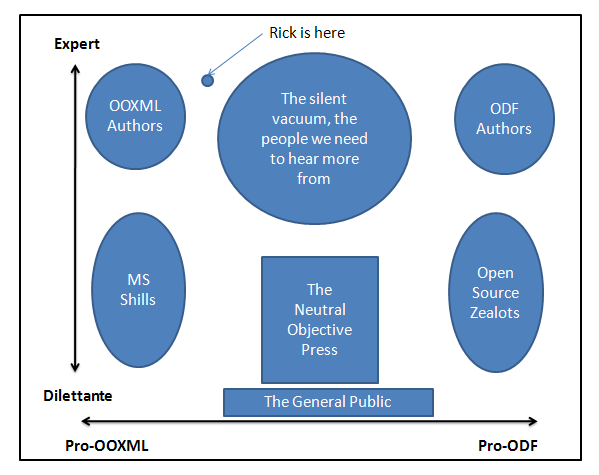 What we seem to be lacking is the expert, neutral technical commentary. This is not too surprising. Many of the experts took sides a long time ago, or decided to sit this one out. That is understandable. But without this center of expert commentary, the press will continue to report the biases of whatever side they happen talk to first.

Where does Rick fit it into this chart? His expertise is undeniable. But if he takes Microsoft’s money he risks losing his reputation for neutrality. That is his choice and I am in no position to fault someone for that. He joins a crowded field of opinionated people already writing on this issue from one angle or another. He’ll likely be one of the better pro-OOXML writers out there. Nothing wrong with that. As Charles McCabe famously said, “Any clod can have the facts, having opinions is an art.”

But I do suggest that Microsoft’s money would have been better spent, and Rick’s skills better used, if they had engaged Rick earlier to help review and improve the OOXML specification. Trying to fix perceptions of the standard after the fact will be a lot harder, and more expensive, than creating a good standard in the first place.

And I will lament the fact that we continue to lack neutral experts who can digest the massive amounts of technical information out there and present it in a way that the press can reference and the public can understand. I think Rick would have served this role admirably. Instead we risk having one less voice in the middle.

Looking at this potential deal with Rick, and Microsoft’s earlier deal with Novell, I wonder if someone at Microsoft thinks that neutrality is dangerous and that their purposes are better served by eliminating it?