Just saw something worth noting. I was on a machine running Office XP and tried to open an Office Open XML (OOXML) formatted document. I don’t know why I tried that, but I did.

Word was smart enough to put up the following dialog:

Now, that is something I hadn’t seen before. I think we all knew that Microsoft was planning a compatibility pack for enabling OOXML on Office 2003 and Office XP. But my 2002 version of Windows XP knows about OOXML? I guess this wisdom must have come down in a previously downloaded Office patch.

In any case, if you click yes, you are directed to this page where you are offered a download of “Microsoft Office Compatibility Pack for Word, Excel, and PowerPoint 2007 File Formats (Beta 2)”. I had the pre-req’s, which included Windows XP SP2 and Office XP SP 3. So downloading a few file conversion filters should be simple and small, right?

Well, simple, but not so small. I was suprised to see that the convertors download was 43MB. That seems a bit large. In comparison, you can download a complete copy of OpenOffice.org, with included support for ODF documents and the Office binary formats, and the entire product is only a 93MB download. The 0.2 ODF Add-in for Word is only 1MB in size. So why does adding OOXML support to Office XP require a 43MB download?

In any case, once it is downloaded and installed, the integration with Office appears seemless. You can open OOXML files from the Windows Explorer by double-clicking on them, you can browse and load them as expected from the File Open dialog in Office, you can re-save files in OOXML format via the File Save, you can create a new document and save it as OOXML, you can even configure Word XP so the OOXML formats are the default format for all saved documents in Word. In fact, you can do all of those things that the Microsoft-supported ODF Add-in is not doing.

As reported earlier, the Microsoft support for ODF puts this ISO standard at a distinct disadvantage, providing no shell integration, removing it from its expected place in the File/Open and File/Save menus, and preventing users from making it the default format in Office.

I tip my hat to Microsoft for the way they have provided OOXML support in earlier versions of Office. Aside from the size of the download, the process was simple and the integration was seamless. That’s the way it should be. But what makes them think that customers using ODF format would want anything less than this? That fact that they’ve been able to integrate OOXML so well only increases the shame in having integrated ODF so poorly. 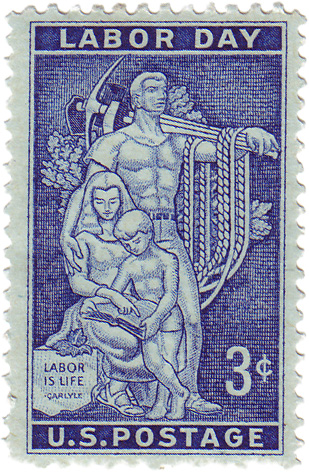 Here you have Scott #1082, with a first day issue of exactly 50 years ago, September 3rd, 1956. The design is by Victor S. McCloskey, Jr. of the Bureau of Engraving and Printing based on a a small portion of a much larger mosaic, “Labor is Life” (also shown below) by the American artist Lumen Martin Winter. This mosaic was unveiled in 1956 by President Eisenhower at the the AFL/CIO Headquarters in Washington DC .

What a difference 50 years makes! One could write at length about how this stamp portrays a quintessentially 1950’s view of the family, the status of women, the industrial base of American labor combined with the influence of depression-era socialist realist art. But it is Labor Day, so I suggest you all get off the computer and start up the grill. That’s what I’m going to do.