Another neo-colonialist press release from Microsoft’s CompTIA lobbying arm, this time inveighing against South Africa’s adoption of ODF as a national standard. One way to point out the absurdity of their logic is to replace the reference to ODF with references to any other useful standard that a government might adopt, like electrical standards.

When we do this, we end up with the following.

For MonPrevAss, the Monopoly Preservation Association, the overall concern for the global electrical industry is to ensure that lawmakers adopt flexible policies and set policy targets rather than deciding on fixed rules, technologies and different national standards to achieve these targets. Such rigid approaches pull the global electrical market apart rather than getting markets to work together and boost innovation for consumers and taxpayers. “The adoption sends a negative signal to a highly innovative sector” says I.M. Atool, MonPrevAss’s Group Director, Public Policy EMEA.

The “South African Bureau of Standards” (SABS) approved the 230V/50Hz residential electrical standard on Friday 18 April as an official national standard. This adoption, if implemented, will reduce choice, decrease the benefits of open competition and thwart innovation. The irony here is that South Africa is moving in a direction which stands in stark relief to the reality of the highly dynamic market, with some 40 different electrical current conventions available today.

In light of the recent ISO/IEC adoption of the Microsoft 240V/55Hz electrical standard, the South African decision will not lead to improvements in the electrical sector. MonPrevAss urges Governments to allow consumers and users to decide which electrical standards are best. We fear that the choice of just one electrical standard runs the risk of being outdated before it is even implemented, as well as being prohibitively costly to public budgets and taxpayers.

Governments should not restrict themselves to working with one electrical standard, and should urge legislators to refrain from any kind of mandatory regulation and discriminatory interventions in the market. The global electrical industry recommends Governments to embrace the reality and logic of choice and to devote their energies to ensuring interoperability through this choice.

Of course, this is just a rehash of an old logical fallacy, related to the old “Broken Windows” fallacy. It is like saying heart disease is a good thing because you have such a wide choice of therapies to treat it. We would all agree that it is far preferable to be healthy and have a wide choice of activities that you want to do, rather than a wide choice of solutions to a problem that you never asked for and don’t want.

Consumers don’t want a bag of adapters to convert between different formats and protocols. That is giving consumers a choice in a solution to a interoperability problem they didn’t ask for and they don’t want. Consumers want a choice of goods and services.

Observe the recent standards war with Blu-ray and HD DVD. Ask yourself:

If every private individual, and every private business has the right to adopt technology standards according to their needs, why should governments be denied that same right? Why should they be forced to take the only certain losing side of every standards war — implementing all standards indiscriminately — a choice that no rational business owner would make?

How many spreadsheet formats does Microsoft use internally for running their business on? Why should governments be denied choice in the same field that Microsoft itself exerts its right to chose?

A curious FAQ put up by an unnamed ISO staffer on MS-OOXML. Question #1 expresses concerns about Fast Tracking a 6,000 page specification, a concern which a large number of NB’s also expressed during the DIS process. Rather than deal honestly with this question, the ISO FAQ says:

The number of pages of a document is not a criterion cited in the JTC 1 Directives for refusal. It should be noted that it is not unusual for IT standards to run to several hundred, or even several thousand pages.

Now certainly there are standards that are several pages long. For example, Microsoft likes to bring up the example of ISO 14496, MPEG 4, at over 4,000 pages in length. But that wasn’t a Fast Track. And as Arnaud Lehors reminded us earlier, MPEG 4 was standardized in 17 parts over 6 years.

So any answer in the FAQ which attempts to consider what is usual and what is unusual must take account of past practice JTC1 Fast Track submissions. That, after all, was the question the FAQ purports to address.

Ecma claims (PowerPoint presentation here) that there have been around 300 Fast Tracked standards since 1987 and Ecma has done around 80% of them. So looking at Ecma Fast Tracks is a reasonable sample. Luckily Ecma has posted all of their standards, from 1991 at least, in a nice table that allows us to examine this question more closely. Since we’re only concerned with JTC1 Fast Tracks, not ISO Fast Tracks or standards that received no approval beyond Ecma, we should look at only those which have ISO/IEC designations. “ISO/IEC” indicates that the standard was approved by JTC1.

So where did things stand on the eve of Microsoft’s submission of OOXML to Ecma?

At that point there had been 187 JTC1 Fast Tracks from Ecma since 1991, with basic descriptive statistics as follows:

A histogram of the page lengths looks like this: 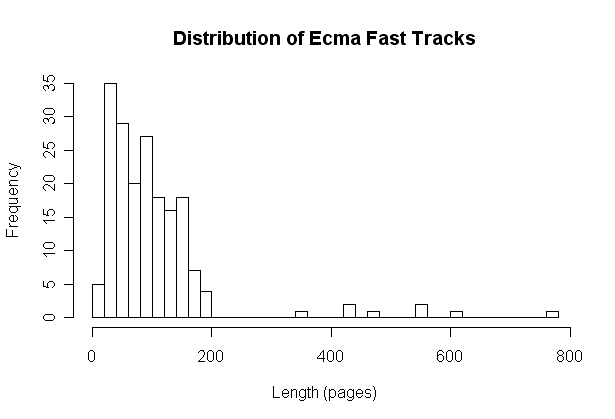 So the ISO statement that “it is not unusual for IT standards to run to several hundred, or even several thousand pages” does not seem to ring true in the case of JTC1 Fast Tracks. A good question to ask anyone who says otherwise is, “In the time since JTC1 was founded, how many JTC1 Fast Tracks have been submitted greater than 1,000 pages in length”. Let me know if you get a straight answer. 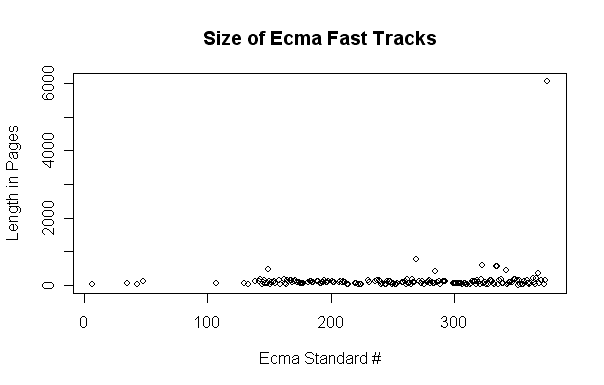 Let’s consider the question of usual and unusual again, the question that ISO is trying to inform the public on. Do you see anything unusual in the above chart? Take a few minutes. It is a little tricky to spot at first, but with some study you will see that one of the standards plotted in the above chart is atypical. Keep looking for it. Focus on the center of the chart, let your eyes relax, clear your mind of extraneous thoughts.

If you don’t see it after 10 minutes or so, don’t feel bad. Some people and even whole companies are not capable of seeing this anomaly. As best as I can tell it is a novel cognitive disorder caused by taking money from Microsoft. I call it “Sinclair’s Syndrome” after Upton Sinclair who gave an early description of the condition, writing in 1935: “It is difficult to get a man to understand something when his salary depends upon his not understanding it.”

For ISO, in a public relations pitch, to blithely suggest that several thousand page Fast Tracks are “not unusual” shows an audacious disregard for the truth and a lack of respect for a public that is looking for ISO to correct its errors, not blow smoke at them in a revisionist attempt to portray the DIS 29500 approval process as normal, acceptable or even legitimate. We should expect better from ISO and we should express disappointment in them when they let us down in our reasonable expectations of honesty. We don’t expect this from Ecma. We don’t expect this from Microsoft. But we should expect this from ISO.

There is a good post by Mathias Bauer on Sun Hamburg’s GullFOSS blog. He deals with the practical importance of OASIS’s “Feedback License” that governs any public feedback OASIS receives from non-TC members.

The ODF TC receives ideas for new features from many places. Many of the ideas come from our TC members themselves, where we have representation from most of the major ODF vendors, from open source projects, interest groups, as well as from individual contributors.

Other ideas come from other vendors or open source projects, from organizations that the TC has a liaison relationship with (like ISO/IEC JTC1/SC34), or individual members of the public.

Contributions from OASIS TC members are already covered by the OASIS IPR Policy. The TC member who contributes written proposals to the TC is obliged from the time of contribution. And other TC members are obliged if they have been TC members for at least 60 days and remain a member 7 days after approval of any Committee Draft. You can see the participation status of TC members here.

Is this extra step annoying? Yes, it is. But this pain is what is necessary to keep our IP pedigree clean and protect the rights of everyone to implement and use ODF. It is part of the price we pay for open standards. Free does not mean free from vigilance.

One of my responsibilities on the ODF TC is to monitor and process the public comments we receive. Regretfully this is a duty which I’ve neglected for too long. So I spent some time this week getting caught up on the comments, entering them all into a tracking spreadsheet. We have a total of 180 public comments since ODF 1.0 was approved by OASIS, covering everything from new feature proposals to reports of typographical errors.

The largest single source of comments is from the Japanese JTC1/SC34 mirror committee, where they have been translating the ODF 1.0 standard into Japanese. As you know, you will get no closer reading of a text than when attempting translation, so we’re glad to receive this scrutiny. I’ll look forward to adding the Japanese translation of ODF along side the existing Russian and Chinese translations soon.

If you have any other ideas for ODF enhancements, or thoughts on the above proposals, please don’t post a response to this blog! Remember, you need to use the comment list for your feedback to be considered by the OASIS ODF TC.

Of course, general comments are always welcome on this blog.

The world should be pleased to note, that with the approval of ISO/IEC 29500, Microsoft’s Vector Markup Language (VML), after failing to be approved by the W3C in 1998 and after being neglected for the better part of a decade, is now also ISO-approved. Thus VML becomes the first and only standard that Microsoft Internet Explorer fully supports.

Congratulations are due to the Internet Explorer team for reaching this milestone!

Now that it has been demonstrated that pushing proprietary interfaces, protocols and formats through ISO is cheaper and faster than writing code to implement existing open standards, one assumes that the future is bright for more such boutique standards from Redmond. Open HTML, anyone?