I noticed a curious argument in Jonathan Corbet’s LWN article “Supporting OOXML in LibreOffice” (behind a pay wall).  Why should we support OOXML?

…as has been pointed out in the discussion, Microsoft will, someday, phase out support for its (equally proprietary) DOC format, leaving OOXML as the only real option for document interchange. There appears to be little hope that Microsoft’s ODF support will be sufficient to make ODF a viable alternative. So any office productivity suite which aspires to millions of users, and which does not support OOXML, will find itself scrambling to add that support when DOC is no longer an option. It seems better to maintain (and improve) that support now than to be rushing to merge a substandard implementation in the future.

Really?  The same company that is unable to fix a leap-year calculation bug from 20 years ago because of fears it might break backwards compatibility is going to remove support for their binary formats?  Seriously, is that what people are saying?  This sounds like something Microsoft would say to scare people into migrating.

But don’t listen to my opinions.  Let’s look at the numbers.  I’ve been tracking document counts via Google for almost four years now, looking at the relative distribution of document types, across OOXML, ODF, Legacy Binary, PDF, XPS, etc.  Because the size of the web is growing, one cannot fairly compare the absolute numbers of documents from week to week.  But the distribution of documents over time is something worth noting. 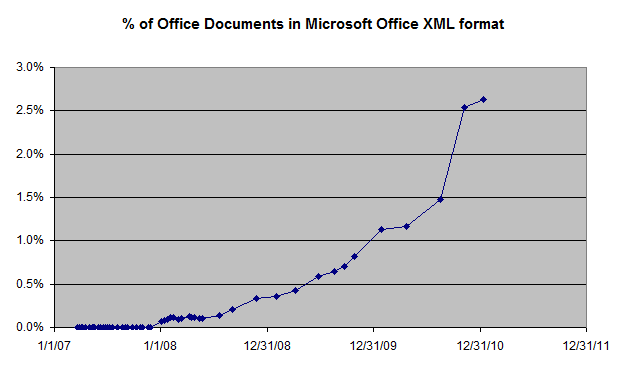 Of course, for any given organization these numbers may vary.  Some are 100% on the XML formats.  Some are 0% on them.   If you look at just “gov” internet domains, the percentage today is only 0.7%.  If you look at only “edu” domains, the number is 4.5%.  No doubt, within organizations, non-public work documents might have a different distribution.  But clearly the large number of existing legacy binary documents on government web sites alone is sufficient to prove my point.  DOC is not going away.

Throughout 2010, I recorded Twitter messages (tweets) from Twitter’s “public timeline“.  I took these snapshots every two minutes, around the clock.  At the end of the year now have 4,973,728 tweets.

I collected the data without any advance thought on what I could do with it.  The general thought was I’d look for something interesting.  Now that 2010 is over, I’ve started some analysis.  I’d to share what I’ve found so far.  More will follow.

It is important to have a proper sense of caution when using this data.  How random is it really?  I don’t know how Twitter produces the “public timeline”.  Certainly it excludes those whose tweets are private.  Also, the time sampled approach, of taking a snapshot of 20 tweets every two minutes, leaves open the possibility of missing short-term phenomena.  For example, if a million users all tweet something on a particular topic at exactly noon on January 4th, and I don’t take a snapshot until 12:04, then I will miss that topic entirely  At the very least it will be under-represented.  But so long as we’re willing to acknowledge that we might be missing interesting behavior that occurs at shorter times scales, we can fairly make some more general observations.

First up I wanted to look at the distribution of tweet lengths.  Are people keeping it short?  Or are they running into the 140-character limit?  The answer, as seen in the following chart, is a clear “Yes” on both counts.    There are two clear peaks, one in the 20-25 character range, and another pushing at the limit, in the 139-140 character length.

So what is going on here?  One explanation could be that the shorter tweets are coming from mobile clients, while longer tweets are coming from web and desktop twitter clients. At first I suspected that the longer tweets might indicate users bumping into the 140 character limit, and this might show itself as truncated content, greater use of abbreviations and general frustration.  But when I took a closer look I saw that most of the maximal length tweets were machine-generated, intentionally targeted to that length,  like:  “New story posted ‘This title is truncated so total tweet is 140 characters long…’ http://bit.ly/foobar”. 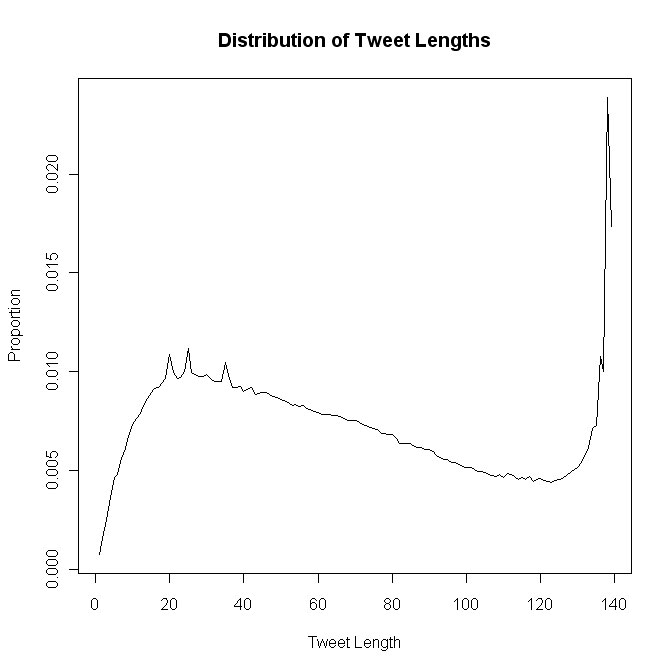 Next, I took a look at hash tags, and tabulated those by frequency.  A word cloud (made in Wordle) of the top 100 tags is:

And here are the top 20 hash tags as a list:

Although we might wonder what Twitter’s revenue model is in the long term, it seems that other companies like Facebook and Google are using Twitter to the own advantage.  There were very few hash tags at the top that were actually topical, like #wordcup.  This is clearly at odds with what Twitter reported on their “Top Twitter Trends in 2010” page.  They list #rememberwhen in first place.  It is 925th on my list.  It is odd that Twitter’s official list contains no non-English hash tags as well.  And no competing social sites, like Facebook.  Obviously they are using a different methodology in putting together their numbers.

Justin Bieber is the clear winner here.  The top 20 were:

Next I looked at the content of the tweets, to find what 5-word strings were the most common.  The top 20 phrases are:

Last up, something I haven’t seen before, a look at the most-common numbers that occured in the text of tweets, truly “Twitter by the Numbers”: 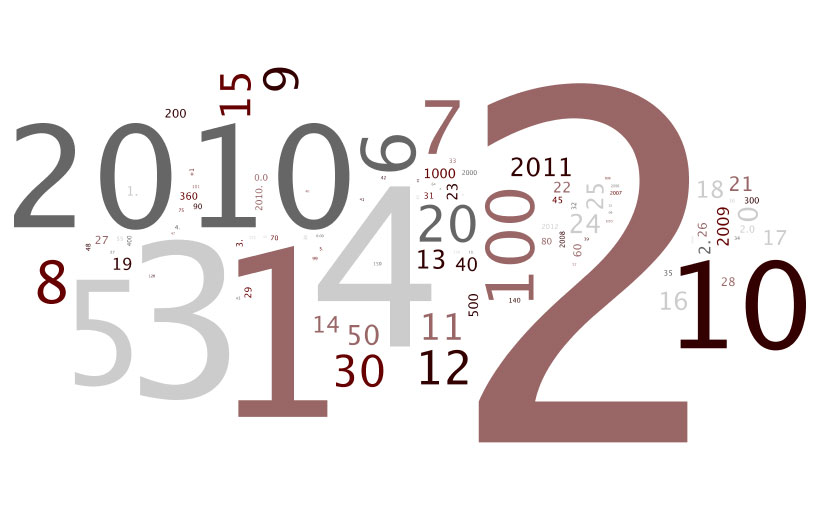 The top numbers were:

(I also have a list of the top URL’s included in tweets.  But they are almost entirely via URL shortners (bit.ly, etc.) where the link no longer works, taken down by the service no doubt for being used in spam.)

If anyone has any further ideas for analysis, let me know.  One thing I’d like to do is chart the percentage of tweets that come from various Twitter clients over time, to track market share statistics.  If I can find a good language classifier (one that can work even on very short text fragments) I can do a breakdown of those.

He writes the worst English that I have ever encountered. It reminds me of a string of wet sponges; it reminds me of tattered washing on the line; it reminds me of stale bean soup, of college yells, of dogs barking idiotically through endless nights. It is so bad that a sort of grandeur creeps into it. It drags itself out of the dark abysm of pish, and crawls insanely up the topmost pinnacle of posh. It is rumble and bumble. It is flap and doodle. It is balder and dash.

— H.L. Mencken (on the writing style of President Warren Harding)