You are here: Home / ODF / PDF, The Waste Land, and Monica’s Blue Dress

Adobe’s PDF Architect, James King, has recently started an “Inside PDF” blog which is well worth subscribing to. I’d especially draw your attention to his post “Submission of PDF to ISO” which has much useful information on the process they are going through in ISO, a process that is slightly different than that used by ODF or OOXML in JTC1. (Note in particular that ISO Fast Track is not exactly the same as JTC1 Fast Track.)

In a more recent post, Archiving Documents, James wonders aloud why anyone would use ODF or OOXML for archiving, compared to PDF or PDF/A, saying, “After all, archiving means preserving things, and usually you want to preserver the total look of a document. PDF/A does that.”

I recommend reading the Archiving Documents post in full, and then return here for an alternate point of view.

We say the word “archive” quite easily and cover a large number of activities by that name, and in doing so risk blurring a number of different activities into one over-generalization. Before you are told that format X or format Y is best for archiving it is fair to ask what is meant by “archiving” and ask who does the archiving, for what purpose and under what constraints.

An example of the range of materials that may be included can be seen this preservation order:

I would pay particular attention to the part at the end, “…drafts; jottings; and notes. Information that serves to identify, locate, or link such material, such as file inventories, file folders, indices, and metadata”.

Similarly, consider government and academic archives, that are preserving documents for the long-term. The archivist tries to anticipate what questions future researchers will have, and then tries to preserve the document in such a way that it can best answer those questions.

A PDF version of a document answers a single question, and answers it quite well: “What did this document look like when printed?” But this is not the only question that one might have of a document. Some other questions that might be asked include:

The PDF answers one question — what does the document look like — but doesn’t help with the other questions. But these other, richer questions, will be the ones that may most interest historians.

Let’s take an analogous case. T.S. Eliot’s 1922 poem The Waste Land is a landmark of 20th century literature. Not only is it important from an artistic and critical perspective, but it is also important from a technology perspective — it is perhaps the first major poem to have been composed at the typewriter. What was published was, like a PDF, what the author intended, what he wanted the world to see. That is all the world knew until around 1970, after the poet’s death, when the rest of the story emerged in the form of typewritten draft versions of the poem, with handwritten comments by Ezra Pound. 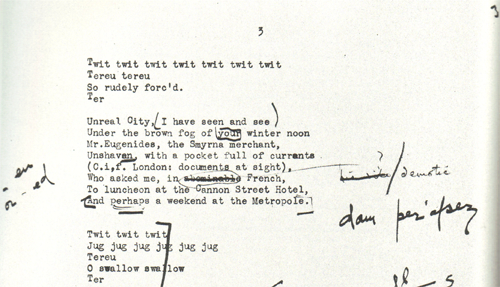 These drafts provided pages and pages of marked up text that showed the nature and degree of the collaboration between Eliot and Pound far more than had been previously known. This is what researchers want to read. The final publication is great, but the working copy tells us so much more about the process. History is so much more than asking “What?”.  It continues by asking “How?” and eventually asking “Why?” — this is where the real insight occurs, going beyond the mere collection of facts and moving on to interpretation. PDF answers the “What?” question admirably. I’m glad we have PDF as a tool for this purpose. But we need to make sure that when archiving documents we allow future researchers to ask and receive answers to the other questions as well.

Flash forward to the technology of today. We are not all writing great poetry, but we are collaborating on authoring and reviewing and commenting on documents. But instead of doing it via handwritten notes, we’re doing it via review & comment features of our word processors. Although the final resulting document may be easily exportable as a PDF document, that is really just a snapshot of what the document looks like today. It loses the record of the collaboration. I don’t think that is what we want to archive, or at least not exclusively. If you archive PDF, then you’ve lost the collaborative record.

Another example, take a spreadsheet. You have cells with formulas and these formulas calculate results which are then displayed. When you make a PDF version of the spreadsheet you have a record of what it “looked like”, but this isn’t the same as “what it is”. You cannot look at the formulas in the PDF. They don’t exist. Future researchers may want to check your spreadsheet’s assumptions, the underlying model. There may also be the question of whether your spreadsheet had errors, whether from a mis-copied formula, or from an underlying bug in the application. If you archive exclusively as PDF, no one will ever be able to answer these questions.

One more example, going back to 1998 and the Clinton/Lewinsky scandal. Kenneth Starr’s report on the case was written in WordPerfect format, distributed to the House of Representatives, whose staff then converted it to HTML form and released it on the web. But due to a glitch in the HTML translation process, footnotes that had been marked as deleted in the WordPerfect file reappeared in the HTML version. So we ended up with an official published Starr Report, as well as an unofficial HTML version which had additional footnotes.

Imagine you are an archivist responsible for the Starr Report. What do you do? Which version(s) do you preserve? Is your job to record the official version, as-published? Or is your job to preserve the record for future researchers? Depending on your job description, this might have a clear-cut answer. But if I were a future historian, I would sure hope that someone someplace had the foresight to archive the original WordPerfect version. It answers more questions than the published version does.

So, to sum it up: What you archive determines what questions you can later ask of a document. If you archive as PDF, you have a high-fidelity version of what the final document looked like. This can answer many, but not all, questions. But for the fullest flexibility in what information you can later extract from the document, you really have no choice but to archive the document in its original authoring format.

An intriguing idea is whether we can have it both ways. Suppose you are in an ODF editor and you have a “Save for archiving…” option that would save your ODF document as normal, but also generate a PDF version of it and store it in the zip archive along with ODF’s XML streams. Then digitally sign the archive along with a time stamp to make it tamper-proof. You would need to define some additional access conventions, but you could end up with a single document that could be loaded in an ODF editor (in read-only mode) to allow examination of the details of spreadsheet formulas, etc., as well as loaded in a PDF reader to show exactly how it was formatted.