We’ve heard a lot of coverage of events in Sweden, Mexico, Australia, the US, etc. But we should remember that there are 150 or so countries eligible to vote. Here is a first-person account of the Microsoft medicine show in Ghana, from Kwasi at Ramblings of an African Geek:

So, the Q&A section rolls around, I asked some questions and an attempt was made by the MS reps to paint me as ill-informed and obtaining all my information from blogs on the internet run by anti-Microsoft fundamentalists. Oh, and of course IBM was mentioned as the prime company lobbying everyone and providing them with groundless reasons to vote against OOXML. Then came the best tactic of the day. Dismissing my questions as ‘too academic’ and ‘concerned with the needs of other nations, not Ghana’. After I stopped being annoyed at the attempt to shut me down, I was highly amused.

(FOSS) Foundation for Africa (FOSSFA), Ms Nnenna Nwakanma, told HANA that Nigeria like any other African country stands to gain by properly investigating the issue on the ground, stressing that Microsoft lobbyists have not been able to convince stakeholders how the OOXML document formats would benefit the public except for those who have Office 2007, which is a proprietary software .

“Only those using Office 2007 can benefit from it. If you use any Office apart from 2007, you first have to upgrade. I cannot understand why norms cannot be used unless certain proprietary changes had to be made,” she said.

On the implication of voting ‘No’ to OOXML being proposed by Microsoft to Africa, especially in relation to e-School initiative, she said, already some African countries are warming up to embrace Open Document Formats (ODF), as an alternative file format.

But back to Sweden. My, my, what a mess. I suspect the same has happened elsewhere, including the US. But no one has been so careless as to leak a memo over here. We feel left out! So, if anyone has a similar “smoking gun” letter sent by Microsoft to line up MS Partners in the US to join INCITS V1 at the last minute, and doesn’t know what to do with it, you might consider letting me know. I’ll trade an original copy of the Utica Saturday Globe of Sept 21st, 1901, the President McKinley memorial issue, with full coverage of his funeral and burial, including a still brilliant page one color portrait (over the fold) of McKinley with Lady Liberty on the side, weeping, draped in flag with shield. Suitable for framing. A true collector’s item for any McKinley fan. 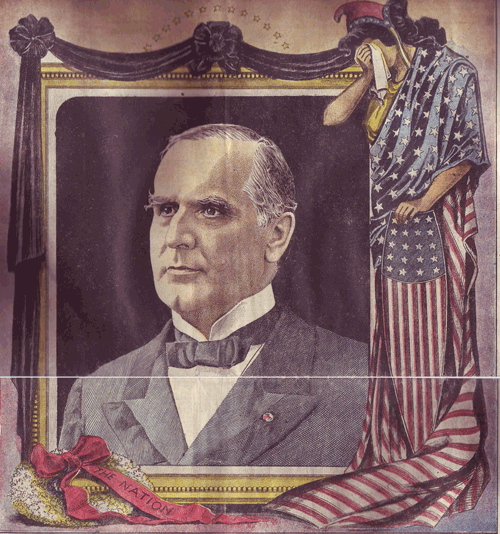 (Trivia: Ever wonder why there are so many McKinley High Schools in the US? Because so many of schools were built after soon after his death.)

So what is wrong with stacking a committee? Isn’t it just an expression of our freedom to associate? An interesting perspective from the Supreme Court, in a case that no one is talking about, but everyone should know: ALLIED TUBE & CONDUIT CORP. v. INDIAN HEAD, INC., 486 U.S. 492 (1988). This appears to be the highest profile case involving stuffing a standards committee:

Petitioner…can, with full antitrust immunity, engage in concerted efforts to influence those governments through direct lobbying, publicity campaigns, and other traditional avenues of political expression. To the extent state and local governments are more difficult to persuade through these other avenues, that no doubt reflects their preference for and confidence in the nonpartisan consensus process that petitioner has undermined. Petitioner remains free to take advantage of the forum provided by the standard-setting process by presenting and vigorously arguing accurate scientific evidence before a nonpartisan private standard-setting body. And petitioner can avoid the strictures of the private standard-setting process by attempting to influence legislatures through other forums.

What petitioner may not do (without exposing itself to possible antitrust liability for direct injuries) is bias the process by, as in this case, stacking the private standard-setting body with decisionmakers sharing their economic interest in restraining competition.

(Over on Slashdot one reader says of the above, “And I don’t think normal people go around reading and quoting 20 year old anti-trust cases for fun.” You don’t know me very well, do you? I read legal analysis for fun. I have my own copy of Tribe’s “American Constitutional Law”, a facsimile edition of Blackstone’s “Commentaries on the Laws of England”, a three volume set of the writings of Edward Coke, and Fergus Kelly’s “A Guide to Early Irish Law”. Never confuse me with normal. But never confuse me for a lawyer either. I don’t generalize well.)

In the “When Your Mom is the Beauty Pageant Judge” department comes news that the most influential “products, applications or technologies of the past 25 years”, according to a super duper scientific poll by CompTIA, is Internet Explorer. Second place is Microsoft Word. Third place is Microsoft Excel. And tied for Fourth Place is Windows 95.

Joe Wilcox over at Microsoft Watch takes a pin to the Microsoft-sponsored puff piece IDC did on OOXML called “Adoption of Document Standards.” And if the data is not rosy enough, Microosft can make it look even better by cutting off the y-axis labels to make a more impressive bar chart. “This one goes to eleven.” You could spend hours exposing the flaws in that paper, but why bother? Life is too short.

Wait… this just in. In a survey of most dumb-ass Microsoft-sponsored surveys of August, first place goes to CompTIA’s “Microsoft, Creator of Civilization, Inventor of Fire & Universal Benefactor of Mankind” and second place goes to IDC’s “4% Looks More Important in a Bar Chart if the Maximum is set to 5%.”

This one brought a smile to my face. Software Engineer job postings at Red Hat in Pune. Resumes must be submitted in ODF format.

Freecode in Norway has link to an an essay [pdf] by Sun’s XML Architect, Jon Bosak entitled “Why OOXML Is Not Ready for Prime Time”. Although I may disagree with Jon on the suitability of this single-vendor format for international standardization (His position is more along the lines of “Not yet” while mine is more like “Hell no”), I must admit he makes some excellent points.

Also, the Linux Foundations Desktop Architects have a statement just out: OOXML – vote “No, with comments“

And speaking of “No, with comments”, now that the Microsoft checks have presumably cleared, self-proclaimed “standards activist” Rick Jelliffe, is recommending that Australia vote “No, with comments.” This after a summer of speaking in favor of OOXML in India, Thailand (twice), Australia, New Zealand and who knows where else. How unfortunate for us all that his sage advice comes only after Standards Australia and most other countries have already finished their deliberations. I can only respond with the words of Lord Byron, from his “Ode to Napoleon”:

And she, proud Austria’s mournful flower,
Thy still imperial bride;
How bears her breast the torturing hour?
Still clings she to thy side ?
Must she too bend, must she too share
Thy late repentance

In the following post Rick reinterprets time, gives sophistry a bad name and takes such liberties with geometry that would make M.C. Escher blush, all in attempt to show that OOXML is really not 6,000 pages long, and it really wasn’t created in less than a year. You can read his attempt to seek a logical basis for redefining reality to fit his preconceptions here, or just consult my one-slide summary below.

(Oh, Rick. One more thing. My last name is shared by Australia’s most famous film director, Peter Weir. I manage to spell your name right. Maybe this mnemonic will help you spell mine right.) 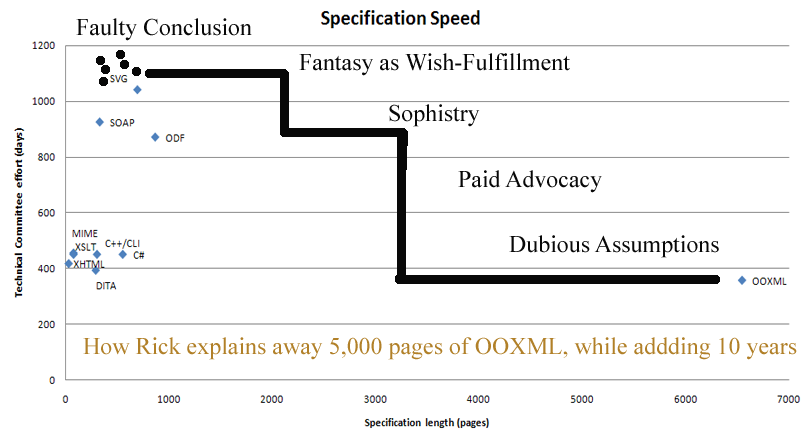