You are here: Home / Standards / The Case for a Single Document Format: Part II

In this post, Part II, we’ll try to explain the forces that tend to unify or divide standards and hopefully make sense of what we saw in Part I.

In Part III we’ll look at the document formats in particular, how we got to the present point, and how and why historically there has always been but a single document format.

In Part IV, if needed, we’ll tie it all together and show why there should be, and will be, only a single open digital document format.

To make sense of the diversity of standardization behavior reviewed in Part I it is necessary to consider the range of benefits that standards bring. Although few standards bring all of these benefits, most will bring one or more.

Standards for screw sizes, wire gauges, paper sizes and shoe sizes are examples of “variety-reducing standards”. In order to encourage economies of scale and the resulting lower costs to producers and consumers, goods that may naturally have had a continuum of allowed properties are discretized into a smaller number of varieties that will be good-enough for most purposes.

For example, my feet may naturally fit best in size 9.3572 shoes. But I do not see that size on the shelves. I see only shoes in half-size increments. Certainly I could order custom-made shoes to fit my feet exactly, but this would be rather expensive. So, accepting that the manufacturing, distribution and retail aspects of the footwear industry cannot stock 1,000’s of different shoe sizes and still sell at a price that I can afford, I buy the most comfortable standard size, usually men’s size 9.5.

A key premise of an efficient & free market is the existence of voluntary sellers and voluntary buyers motivated by self-interest in the presence of perfect information. But the real marketplace often does not work that way. In many cases there is an asymmetry of information which hurts the consumer, as well as the seller.

For example, when you buy a box of breakfast cereal at the supermarket, what do you know about it? You cannot open the box and sample it. You cannot remove a portion of the cereal, bring it to a lab and test it for the presence of nuts or measure the amount of fiber contained in it. The box is sealed and the contents invisible. All you can do is hold and shake the box.

The disadvantage to the consumer from this information asymmetry is obvious. But the manufacturer suffers as well. This stems from the difficulty of charging a premium for special-grade products if this higher grade cannot be verified by the consumer prior to purchase. How can you sell low-fat or high-fiber or all-natural or low-carb foods and charge more for those benefits, if anyone can slap that label on their box?

The government-mandated food ingredient and nutritional labels solves the problem. The supermarket is full of standards like this, from standardized grades of eggs, meat, produce, olive oil, wine, etc. There are voluntary standards as well, like organic food labeling standards, that fulfill a similar purpose.

Compatibility standards, also called interface standards, provide a common technical specification which can be shared by multiple producers to achieve interoperability. In some cases, these standards are mandated by the government. For example, if you want to ship a letter using First Class postage, you must adhere to certain size and shape restrictions on the letter. If you want to to send many letters at once, using the reduced bulk rate, then you must follow additional constraints on how the letters are addressed and sorted. If you want to deal with the Post Office, then these are the standards you must follow.

Similarly, if you are a software developer and you want to write an application that does electronic tax submissions, then you most follow the data definitions and protocols defined by the IRS.

Required interface standards are quite common when dealing with the government. Regulations requiring the use of specific standards also promote public safety, health and environmental protection.

And not just government. A sufficiently dominant company in an industry, a WalMart, an Amazon or an eBay, can often define and mandate the use of specific standards by their suppliers. If you want to do business with WalMart, then you must play by their rules.

The first person to have a telephone received little immediate value from it. All Mr. Bell could do was call Mr. Watson and tell him to come over. But the value of the telephone grew as each new subscriber was connected to the network, since there were now more people who could be contacted. Each new user brought value to all users, present and future. When the value of a technology increases when more people use it, then you have a network effect.

Of course, this only works up to a point. There are diminishing returns. When the last rural villager in Albania gets a telephone connection, I personally will not notice any incremental benefit. But when we’re talking about the initial growth period of the technology, then the above rule is roughly the behavior we see.

If we delve deeper we can talk about two types of network effects: direct and indirect. The direct effect, as described above, is the increased value you receive in using the system as greater numbers of other people also use the system. The indirect effects are the supply-side effects, caused by things like increased choice in vendors, increased choice in after-market options and repairs, increased cost efficiencies and economies of scale by a market that can optimize production around a single standard.

So take the example of eBay. The direct network effect is clear. The more people that use it, the more buyers and sellers are present, and the more value there is to all of the buyers and sellers. The indirect network effect is the number of 3rd party tools for listing auctions, processing sales, watching for wanted items, sniping, etc., which are available because of the concentrated attention on this one online auction site.

It might be helpful to look at this graphically. The following chart attempts to show two things: 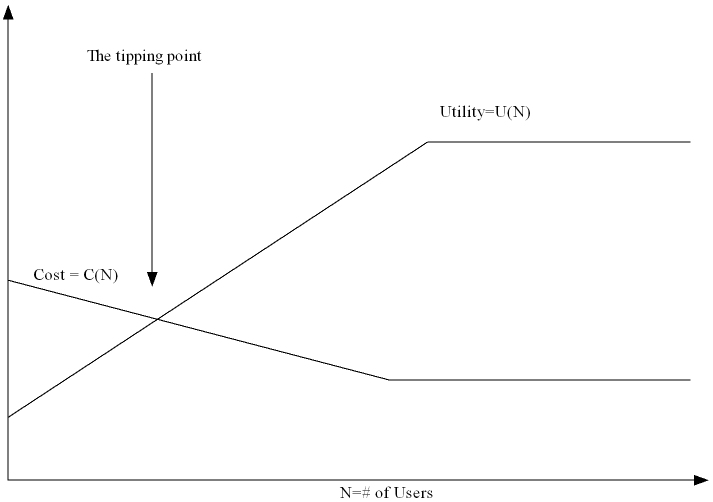 A few things to note:

So what does this all have to do with standards? My observation is that a single standard in a domain naturally results when there are strong direct and indirect network effects. And where these network effects do not exist, or are weak, then multiple standards flourish.

This can be seen as societal value maximization. A network of N-participants has a total value proportionate to N-squared. Split this into two equally-sized incompatible networks and the value is 2*(N/2)^2 or (N^2)/2. The maximal value comes only with a single network governed by a single standard.

Allowing two different networks to interoperate may be technically possible via bridging, adapting or converting, but this at best preserves the direct network effects only. The indirect effects, the economies of scale, the choice of multiple vendors, the 3rd party after-market options, etc., these reach their maximum value with a single network. The indirect network benefits essentially follow from the industry concentrating their attention and effort around a single standard. When split into multiple networks, the industry instead concentrates their attention on adapters, bridges and convertors, which requires effort and expense on their part, with the cost eventually passed on to the consumer, although it brings the consumer no net benefit over having a single network.

The Cases from Part I

Let’s finish by reviewing the cases presented in Part I, in light of the above analysis, to see if those examples make more sense now.

Well, this is too long already, so I’ll stop here.

In Part III I’ll look at the history of document formats, and see what factors have influenced their standardization. Some questions to think about until then:

In Part III, we’ll look at that last question in particular, including an illustrated review of the history of document formats.