You are here: Home / Archives for NASA Art Program

Paul Calle (1928-) drew science fiction illustrations, including for now-legendary magazines like Galaxy Science Fiction and Amazing Stories. Then a funny thing happened. The science fiction became real. Sputnik launched in October, 1957. NASA was created in 1958. Glenn orbited the earth in 1962. The space race was on.

In the Fall of 1962 NASA chief James Webb created the NASA Art Program. Under the direction of James D. Dean, artists were invited to Cape Canaveral, to observe and interact with the astronauts and staff and to document history in the making.

When a major launch takes place, more than two hundred cameras record every split second of the activity. Every nut, bolt and miniaturized electronic device is photographed from every angle…but as Daumier pointed out a century ago, “The camera sees everything but understands nothing.” It is the emotional impact, interpretation and hidden significance of the events that lie within the artist’s vision.

Paul Calle was one of the artists engaged, during the Mercury, Gemini and Apollo missions. Calle’s illustration of the Apollo 11 moon landing is one of the iconic images of landing, as reproduced in the 1969 air mail stamp, Scott # C76, in 6-color Giori process: 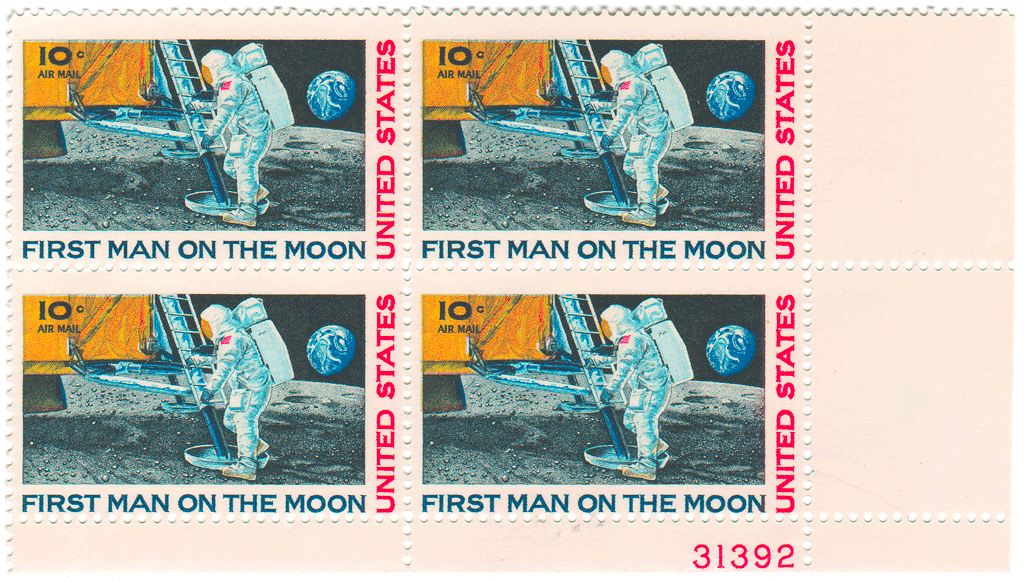 We’ll be remembering a lot tomorrow — the astronauts, the engineers, the journalists — that all contributed to what was a defining moment of the modern era. Let’s also remember the artists and the part they played.

(And why don’t we have any good moon landing songs from the time?)

— John Maynard Keynes, when reproached for changing his opinion