You are here: Home / Archives for Birch Sap Wine 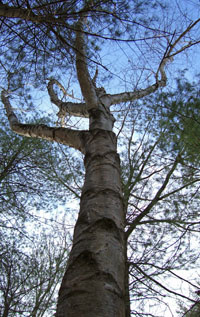 Spring is here. In the last two weeks I’ve seen the snowdrops and the crocuses bloom. Spring is here. But don’t look outside. Forgot the newly-fallen snow. This is New England. Late snow fall is unwelcome, though not unusual. But in no case will it stop the season’s first harvest.

Harvest?! What can one harvest in early April? Birch sap, my friends, Birch sap. The nectar of the gods. (Well, the sap of the gods at the very least). This is the only good reason to put one’s boots on and tromp around the woods this time of year. The goal, as you might imagine, is to make birch sap wine. Here is how it is done.

First, find yourself a birch tree. I used a white (paper) birch. The paper birch doesn’t have the highest sugar content, but will do. Black and yellow birches would be preferred, if you have them. You want a big birch tree, not some little twig of a tree. Bigger means more sap with less stress to the tree.

Second, plan to start collecting sap right around this time, earliest spring, when the sap rises from the roots. If you try too early you’ll get nothing, and if you wait for the warmer weather, the sap gets cloudy. So there is a 2-week window, right around early April here in Massachusetts, that is perfect. 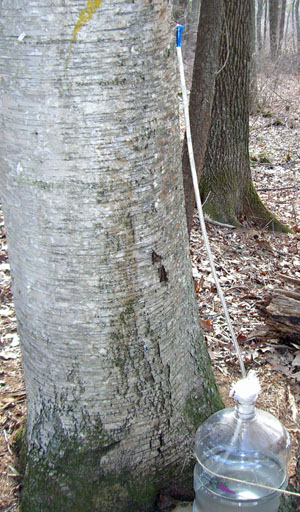 Next you need some basic equipment:

Since my birch tree was 100-yards down a hill in the woods, by a stream, I packed the equipment into a sack and carried the jug down the hill. The rest is easy. Drill a hole with a 5/16″ bit, around 3-feet off the ground, angled slightly up. It doesn’t need to be deep, only an inch or so. Then tap in the stile with the mallet, connect the rubber tubing and so it drains into the jug. I ended up securing my jug to the tree with rope. I don’t know why. Just habit. I don’t think there is anything in those woods big enough to walk away with 5-gallons of birch sap, but too dumb to cut a rope.

The sap collects around a half-gallon a day. Since the temperatures were low, I didn’t worry too much about spontaneous fermentation from wild yeast, though I did add some campden tablets every day or so as insurance, to keep it sterile.

After around five days my jug was full. Time to return it home. This was the weakness of my plan. Bringing a 5-gallon jug full of birch sap 100-yards uphill through dense brush was a significantly greater task than bringing the empty jug down the hill. I’ll need to think this over more next time.

Once in the kitchen, I did some testing, confirming the sugar level with a hydrometer and refractometer. The sap was only around 1.5% sugar. This is about what I expected. Commercial birch syrup producers say it takes 80 gallons of birch sap to make 1 gallon of birch syrup. I don’t need something that concentrated, but I do need to get to 20% sugar content or so for fermentation.

So what was the character of my raw ingredients? I’d describe it as having a sweet, warming, earthy smell, with a hint of wintergreen. My wife simply said, “It smells like dirt”. De gustibus non disputandum, especially with one’s uxor. I’ll see what the winemaker’s art can do to this unusual liquid.

I transfer the sap into a 6-gallon brew pot and start it boiling for most of an afternoon. Evaporation concentrates the sugar and the flavor. Once I got it down to gallon, I added a few sprigs of fresh spearmint for a little accent flavor and to restore some of the aroma that was lost from the long boil.

At that point I cooled the sap, remeasured the sugar content and added cane sugar to bring it up to a specific gravity of 1.085. This should result in an alcohol percentage of around 11% if it ferments dry. I also added some citric acid to put the pH where I want it (I could have added orange juice instead if I wanted) and then added the yeast. I’m using Lavlin V1116 “Montpellier” yeast, a strain which I’ve used successfully with fruit wines before.

The birch sap wine is fermenting now. If a few days I’ll transfer to a carboy for clarification and in a few months I’ll bottle it and set it sit another 6 months or so for conditioning. I have never done a birch sap wine before so I have no idea how this will turn out.