You are here: Home / Popular Posts / The Right and Lawful Rood 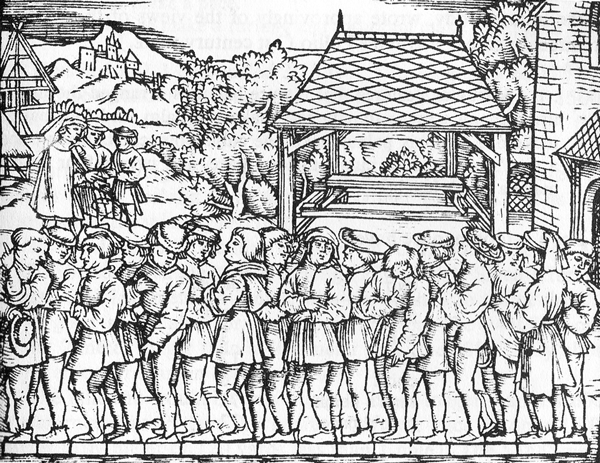 So what do we have here?

Sixteen men, lined up. They seem to be having a good time. Some are older, some younger. A historian of fashion might be able to tell us their relative social status, and perhaps their trade, by looking at their clothing. In the background, three men are observing and comparing notes. To the right is a church, and to the left is the village.

So what are they doing?

Is it an early early depiction of the hokey-pokey (“You put your left foot in…”) ?

Although the scene obviously has some social aspects, the primary activity depicted here is standards development, particularly the historically mandated procedure for determining the linear measurement known as the “rood”, related to the English “rod”, the German “rute” and the Danish “rode”.

Stand at the door of a church on a Sunday and bid 16 men to stop, tall ones and small ones, as they happen to pass out when the service is finished; then make them put their left feet one behind the other, and the length thus obtained shall be a right and lawful rood to measure and survey the land with, and the 16th part of it shall be the right and lawful foot.

From a technical point of view, you might wonder why they didn’t have a standard rule, a metal bar etched with two lines, something tangible which could be carried about and used to calibrate? But who would maintain the standard? And would you trust them? Physical objects may be counterfeited, replaced, shaved, distorted, even stolen. Those who are buying land would like a longer rood, and those selling land would like a shorter rood, so the motivation for fraud is clear.

But the average length of the feet of 16 random men — that is probably not going to change much in a given town, or even across a country. Compared to the logistics required to create, duplicate and distribute a standard rule, the described statistical approach is easier to administer and was accurate enough for the time.

But there is more to it than that. Why didn’t the surveyor just measure his own feet? Or those of his friends? And why require that it be done at church? Why not wherever the surveyor wants to do it?

There must have been something about the process itself, the lining up and being measured, publicly, neighbor beside neighbor, next to the church, that lent it legitimacy. These men are literally voting with their feet.

The transparency of the process is also notable. The rood was determined in public, at the time and place most likely to offer everyone in the town the opportunity to observe. It is hard to cheat with the public watching. Anyone there trying to wear clown shoes or going barefoot would be immediately detected.

Also, it is notable that participation was on an equal basis. No one was able to say, “I am a rich merchant, so I should be allowed to bring 5 pairs of my shoes and line them up in front of me”. And certainly no one could say, “I am the King, the standard is determined by my foot and my foot alone”. This is good, because the variation from King to King would tend to be much greater than the variation from different random samplings of 16 men.