In a previous post I looked at how LibreOffice inflates its user and download stats, claiming to have far more users than it actually has.  Several journalists took these claims at face value and repeated them in their articles, never questioning whether LibreOffice representatives were peddling anything other than the plain, honest truth.  No one seemed to noticed that the claims  did not pass the” sniff test”.  No one investigated more deeply.  Until now.  I hope that after reading these posts that you, gentle reader, will exercise your brain the next time you read a press release or blog post from LibreOffice, and try harder to separate fact from fiction.  It will not be easy.

In this post I’m taking a look at another set of claims, those concerning the size of the LibreOffice community.  I’ll lay out the plain facts and the analysis and invite contradictions or confirmations.  In return I’ll probably get more personal attacks, but that comes with the territory.  The LibreOffice marketing lead has already declared me personally to me their number one enemy.  I’m sure Microsoft is comforted by this thought.

LibreOffice, from the start, has made incredible claims as to the size of its volunteer base.  The claims read like something from ancient battle accounts, with men 10-feet tall and armies of 500,000.

As is common with LibreOffice announcements, these claims are made without definitions, without a stated methodology, without context.  So the innocent reader might read terms like “family of contributors” or “active volunteers” or “community” and think these terms are used in their ordinary sense.  But they are not, as we shall see.

The Mythical Wiki Army of 3000

The key to finding the 3000 contributors claimed by LibreOffice is to note the fine print of their blog post, where they say of the additional volunteers:  “Overall, the number of these people is over 3,000, if we take as a measure those who have contributed to the project wiki.”

Let’s take a look at their wiki stats then.  I’ll give a screen shot in case this page becomes unavailable: 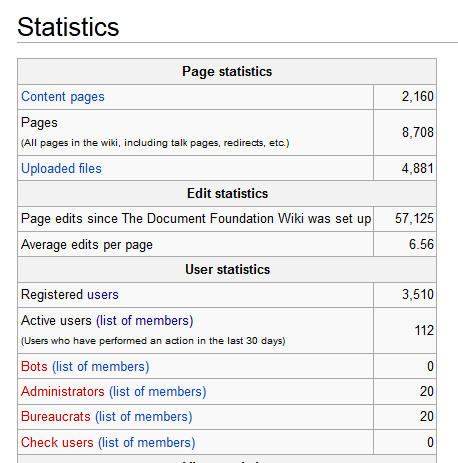 So as you see, they do indeed have 3,510 “registered users”.  So their blog post was correct, end of story.   They indeed have “a community of over 3,000 volunteers from the five continents”.  Right?

Not so quick.  There is less here than meets the eye.  Far less.   Let’s look at some problems with this figure:

First, the sniff test.  If you had a community of 3500 wiki contributors, would after 2 years your wiki have only 2160 content pages?  Is this the output one would expect from a community that size?  Less than one half-page per contributor per year, from this “larger number of active volunteers” ?  This disconnect between claims and reality should be enough to warrant a closer examination.  This just doesn’t sound credible.

Fortunately the wiki stats allow us to see exactly how many edits each registered user made to the wiki.  Curiously, of this “community of over 3,000 volunteers from the five continent”, 1777 of them (over half) have made zero edits.  Zero, zip, gar nichts, nada, niente, zilch.  This is quite remarkable.  A community of contributors where half have made no contributions?!  Is that what you commonly think of when you read the phrase “active contributor” in a press release?  Evidently, in LibreLand you do.

Further, there are many users with a single edit, accounts like Cashloans121, Fastloans1, Fastloans2, etc.  Interesting names, yes?  Of course, these are the spam accounts, created so that advertising could be added to User or other pages.   It is also common for users to register and to make no other “contribution” than to put their C.V. on their User page.  I won’t embarrass the individuals users who have done this, but I see many examples of this on the LibreOffice wiki, where the only “contribution” from a user is self-promotion.   In total, 583 of the registered users made only a single edit in the past two years.   449 have made only 2 edits.  Sadly, our army of 3000 “active volunteers” is shrinking at a distressing rate.

Spam and other issues are well-known to organizations that use wikis.  You don’t claim that your community consists of all registered users of the wiki.  To make a claim like that in a press release is deceptive.  It is a statistic that has no relation to reality.   If the Apache OpenOffice project did exactly what LibreOffice did, and claimed its community size based on the number of registered wiki users, it could claim it had over 75 thousand contributors!

So what is one to do, with such messy data?  Certainly claiming 3,000 contributors without any caution about the above concerns is not recommended.   Instead, if the phrase “active volunteer” is more than empty syllables you need to apply some reasonable threshold to separate an active member of the community from spam, empty registrations or volunteers that showed up for one day and were never seen again.

One criterion is suggested by MediaWiki itself, in its stats report.  It shows that LibreOffice has 112 “active users”, which it defines as users who have made a contribution in the last month.  Another technique might be to look at users who have made, say some non-trivial contribution, say 10 page edits in the past two years, in which case you will show 343 active contributors.  Another way is to ask how many contributors combined account for 90% of all of the edits.  I prefer that metric, and the answer in this case is 342 active contributors.   But the only way you can claim  “a community of over 3,000 volunteers from the five continents” is to have a disregard for facts, and also a disrespect for your reader.  You burn credibility, one of the most important assets an open source project can have.

However you slice it, LibreOffice is overstating the size of their active contributor community by a factor of 10.