Google Books has provided me endless hours of enjoyment. Sure, the collection seems to consist mainly of old, out of copyright books, but that makes it even more enticing. It is like a fine used-book store, without the musty smell.

Imagine. It is late at night, and the library is closed and Amazon cannot deliver fast enough. But you absolutely must have immediate access to Kramer and Sprenger’s witch-hunting manual, the Malleus Maleficarum, specifically the 1669 Lyon edition. What do you do?

A quick search of Google Books, and there you have it, in full text, with the ability to download it in PDF if you want. 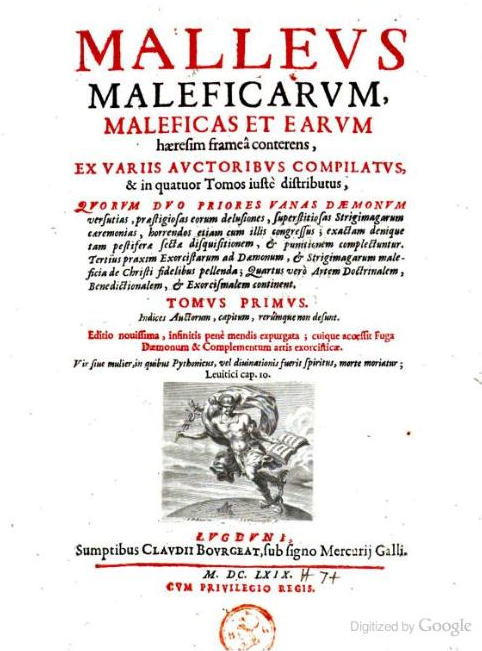 What you do with the “Hammer of Witches” is your own business. But who wouldn’t have a little extra bounce in their step knowing they have a copy tucked away on their USB memory stick, “just in case”?

And so, I was browsing through “many a quaint and curious volume of forgotten lore” when I came across a book with the imposing title The Moral Aspects of Medical Life, Consisting of the ‘Akesios’ of K.F.H. Marx, translated from the German with Biographical Notes and Illustrative Remarks by James Mackness, M.D., published in London in 1846. Note that this is by Karl Friedrich Heinrich Marx (1796-1877), the German physician, not to be confused with the founder of modern communism Karl Heinrich Marx (1818-1893).

Within this text is printed a most remarkable diagram, “A Moral and Physical Thermometer”. A footnote ascribes it to another work,’Public Characters’, London, 1801, pg 499.

In any case here it is, a marvelous example of data presentation and visualization from 200 years ago. It shows, in parallel scales, the strength of various drinks as well as their effects. 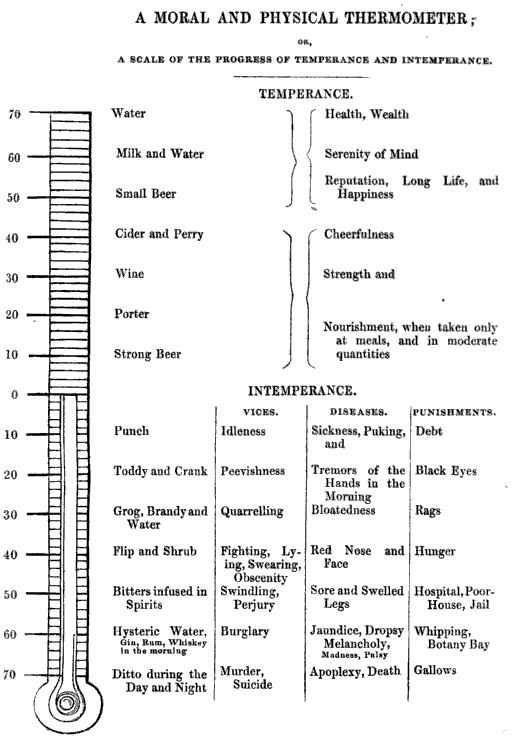 Now, mind you that this diagram is coming from an advocate of water drinking, but it is an interesting view of the state of drink in 1801 London.

A few things stand out:

Cider (to American readers) is non-alcoholic. Here it apparently refers to hard cider. Perry is like hard cider, only made from pears. Don’t see much of that around here.

Why is wine listed as weaker than porter and great beer? Today porter is 5% ABV or so, while wine is 12% or so. And even strong beers today are 6-7% ABV. So were things so much different back in 1801? Or is the chart correlated with the social stigma attached to the drink, and not necessarily the potency of the drink?

Some of the drinks are obscure today, in particular toddy (any hot, spiced drink, like mulled cider), crank (unknown — not listed in the OED), flip (eggnog-like drinks) and shrub (lemon juice and rum)

Hysteric Water — we may forget that the root word here is from the Greek “hystera”, meaning uterus. It was thought that hysteria was predominately a disorder of women, and was treated by various means, including “Hysteric Water”, which according to one period recipe was brandy infused with medicinal herbs: valerian, pennyroyal, rue, mugwort, savin, orange peel, and lovage. It was taken in small doses: 1 ounce.

So why is Hysteric Water listed as the worst of the lot, the one where drinking it leads one to risk whipping or exile to the Australian penal colony of Botany Bay? Perhaps there was some additional social stigma attached.

One period commenter described the state of affairs like this:

Many a good woman, who would start at the very mention of strong waters, cannot conceive there can be any harm in a cordial. And as the fair sex are more particularly subject to a depression of spirits, it is no wonder that they should convert their apothecaries’ shops into rich cordial warehouses, and take drams by way of physic; as the common people make gin serve for meat, drink, and clothes. The ladies perhaps may not be aware, that every time they have recourse to their Hartshorn or Lavender Drops, to drive away the vapours, they in effect take a dram ; and they may be assured, that their Colic, Surfeit, and plague Waters, are to be ranked among spirituous liquors, as well as the common stuff at the gin-shop. The college of Physicians, in their last review of the London Dispensatory, for this very reason expelled the Strong Water, generally known by the soothing name of Hysteric Water; because it was a lure to the female sex to dram it by authority, and to get tipsy secundum artem.

If any of my fair readers have at all given into this pernicious practice of dram-drinking, I must intreat them to leave it off betimes, before it has taken such hold of them, as they can never shake off. For the desire of drams steals upon them, and grows to be habitual, by imperceptible degrees : as those who are accustomed to take opiates, are obliged to encrease the dose gradually, and at last cannot sleep without it.

But it is comforting to know that then, as today, a moderate beer is still good for “reputation, long life and happiness”.